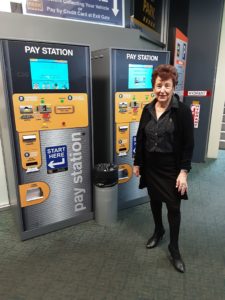 Care Park prides itself on the excellence and contributions of its staff to provide our clients the best customer experience at every level of their parking journey with us.

In 2000 the newly formed Care Park which had started operations in Victoria a couple of years beforehand, expanded its Victorian operation into Tasmania with the purchase of one of the buildings located in the Quadrant Plaza to house its Launceston operations. It later has become the headquarters of Care Park’s Tasmania services.

Care Park staffer Lynne Newton is an integral part of Care Park’s Tasmania journey and a well-known staffer to many customers who were greeted by her for many years when there was still a ticket booth at the Quadrant Plaza car park, which Care Park manages.

Lynne has served 18 years at Care Park and this year, in October, celebrates a milestone birthday – she will be 80 and officially an octogenarian. Age has not caught up with Lynne’s boundless energy and the enthusiasm she shows for all the work she does at Care Park.

Lynne first became known to the Care Park team as a tenant in the arcade building purchased by Care Park in 2000.

In a short time, Care Park staff could see Lynne had energy to boot and was asked if she could fill in at the Quadrant Plaza ticket booth on a casual basis which she did happily meeting lots of residents and visitors along the way.

Her happy disposition and ability to resolve difficult customer complaints came to the fore some years ago when she was to be one of the team to handle customer enquiries and field questions about overdue payment notices.

“It was one of those situations where I needed to show respect for their anger, but at the same time we provided a service and we hadn’t been paid for that parking service so we were chasing up those owed monies. The conversations weren’t easy, but showing respect was important in all those conversations,” Lynne says.

“Through my 18 years at Care Park I have seen a lot of technology changes. When I started with Care Park the technology we were using was the CMA coin machines and we only had a few car parks in Tasmania, three of which were run as a manned booth.

“I’ve seen technology progress to Focus coin machines, then CDS coin/card machines, automation technology and phone parking apps. I have been involved in the transition from handwritten payment notices to autocite technology and now witnessing the implementation of the new smart phone technology.”

In 2013 Lynne finished her role manning the booth at the Quadrant Plaza car park as the car park was automated. Her enthusiasm and happy disposition made her the perfect candidate to take on the public relations role assisting customers to transition to new technology in parking.

Her experience in this role was carried through to Burnie for the automation of the Burnie Plaza car park which too was a manned car park.

“It was my role to train the staff and assist customers with the changes. I’ve worked with a team of five and six other Care Park staffers, but during the recent COVID times my work has been with two other staffers complementing each other’s duties and keeping our customers safe.”

Lynne pays tribute to her colleagues and also one of the car park owners Don and Janet Allen.

“I’ve enjoyed many an extravagant Christmas Party put on by our landlords Don and Janet Allen, Care Park parties and social events with staff over the years and enjoy the strong family feel culture cultivated at Care Park.

“After 18 years at Care Park and celebrating this milestone birthday, I’m so pleased I’ll be sharing it with the staff here,” Lynne said.

Happy birthday to Lynne Newton from all the Care Park team – our wonderful 80 year old turning 18.

Her latest achievement has been to build a 7-metre entertaining deck with the help of a friend while going through radiation treatment for breast cancer.